The Amanalco-Valle de Bravo basin in central Mexico is a magnificent landscape of hills, forests, fields and waterfalls. It seems idyllic – but the land and forests are under severe stress, creating complex challenges for thousands of families. The Mexican Civil Council for Sustainable Forestry (Consejo Civil Mexicano para la Silvicultura Sostenible – CCMSS) has set itself the task of halting the large-scale land and forest degradation in the basin – and was honoured with the UNCCD’s Land for Life Award 2013 for its remarkable success in promoting sustainable land management practices here. 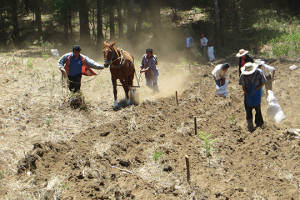 For the people of Valle de Bravo, the fear that their land could be washed away is an ever-present reality. A worrying 22 per cent of the basin’s surface area has a level of erosion of more than 50 tonnes per hectare per year, causing sedimentation of water bodies, soil loss and reduced productivity. Bad land management practices have also contributed to a decline in soil quality. Sergio Madrid, CCMSS’s Executive Director, reports that in the past, the farmers in the valley harvested around three tonnes of maize per hectare. Today, it is as little as 300 kg. How can they sustain their livelihoods if this negative trend cannot be stopped? The impacts are felt further afield as well: the basin supplies water to millions of people in the metropolitan region of Mexico City, which is in permanent water crisis.

CCMSS has set itself an ambitious goal: to revitalise the watershed and improve its ecological functions. Its mission statement includes a long list of activities with a focus on sustainable land management, strengthening governance, developing a scheme for Payment for Environmental Services (PES), and reducing emissions from deforestation and forest degradation (REDD+).

But why is the land degrading? One reason is that farmers had replaced traditional agricultural practices with techniques with greater environmental impact. This resulted in the use of excessive quantities of nutrient-rich fertilisers. The farmers now know that this was the wrong approach. Population pressure, increased demand for water and uncontrolled development have also taken their toll in recent decades, turning the watershed into an ecosystem at risk.

CCMSS takes a broad approach to tackle the challenges. It focuses on the valley’s natural resources – soil, water and biodiversity – in productive sectors such as agriculture, livestock husbandry and forestry.

For CCMSS, the local communities and ejidos are the key to success. They have long been marginalised, but own more than 50 per cent of forest land in the Amanalco-Valle de Bravo basin. These collective entities are mainly rural and livelihoods are based on the use and management of natural resources.

Together with the communities, CCMSS designed a payment scheme with two components. It includes payments to individual farmers as a reward for appropriate management of their agricultural parcels, and payments for good management practices in ejidos’ communal areas such as forests, grasslands, canyons, roads and streams. The pilot scheme, which is administered with public and private resources, thus recognises community land use planning on a larger scale as well as conservation plans on single parcels.

This approach has already paid off. Today, the quality of hydrological and environmental services has clearly improved. People also appreciate the PES because it valorises traditional knowledge and provides economic incentives for people to remain in their rural communities, thus reducing rural-urban drift.